This review of the Wolf Trap show was submitted to us by a shy young lady who wanted to share her story but remain anonymous….maybe we can encourage her to post more.   🙂

The following is my Il Volo story. I felt compelled to share it for some reason. I hope you all enjoy!
Sometime in March when the Il Volo tour dates were released I saw, remarkably, that after a few years of waiting, they had at last come near the Virginia area.

Needless to say, I was borderline ecstatic.

I’m not exactly the sort of person that goes into rhapsodies over things like this, but this was almost a miracle. I was expecting the usual ceremony of cake for my birthday… but this, never! It also completely removed my superstition of Friday the 13th. Did I mention there was a “Strawberry Moon” for the 13th? Not to mention the astrologists were simply all over that day… I prefer solid facts, though. But I digress. 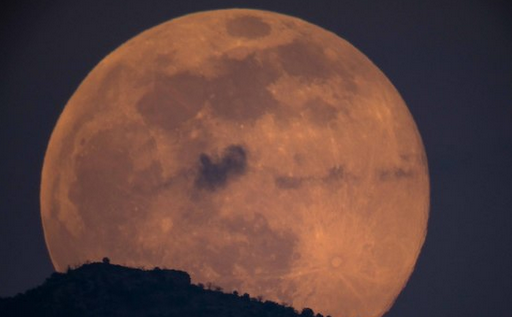 On the way there, the weather was downright awful, unfortunately. Terribly heavy rain, but it cleared soon enough.

We finally arrived at Wolf Trap (lovely place, may I add) an hour early, but the place was already packed. When they say arrive an hour early, they mean it. 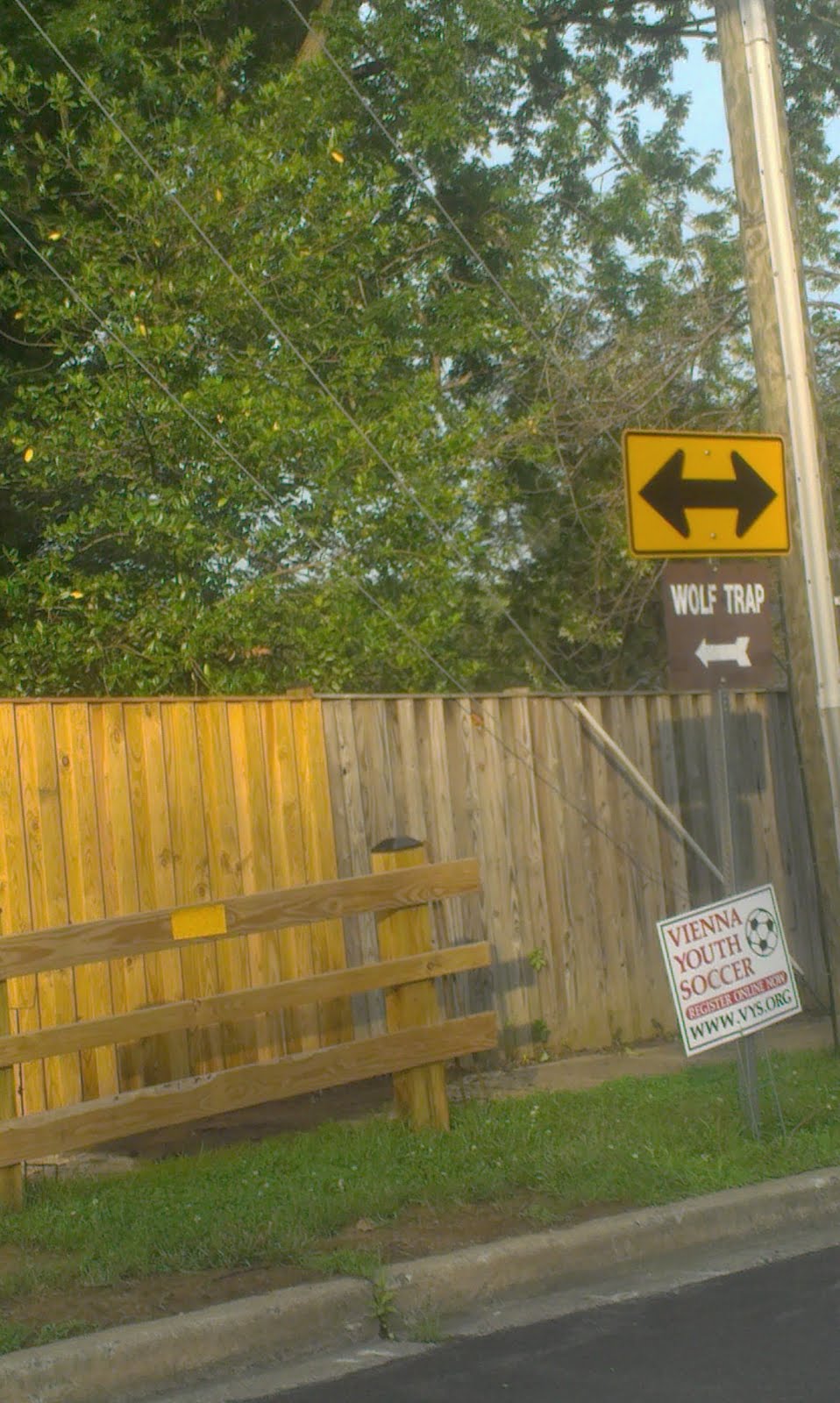 It was rather humid there (or maybe I just hate heat!) but by the time we got there, it calmed down nicely. The weather was acting up for just a moment and the wind even moved the curtain a bit before showtime, humorously. By the way, they were about 3 minutes or so late. Unforgivable!  😉

Fortunately the crowd was mostly older ladies and gentlemen so my sensitive hearing was not irritated (I’ve had to forego concerts and baseball games because people screaming in my ear is a no-no.)

The backdrop was not a video like past seasons, it was simply a red, green, etc. etc. background that I much preferred.

Unbelievable as it may seem, I could have chosen closer seats, but the prospect of somebody possibly serenading me for a few seconds before thousands of people terrifies me beyond measure. No offense, of course.

My adolescent joy had probably reached its zenith when the show finally started. I actually had only listened to a handful of their songs before the concert because I wanted to keep them fresh, but don’t ask me how I managed to do that!

I will never forget the way I felt when the concert finally started. A billion Ennio Morricone death/love themes couldn’t of properly conveyed how I felt. When I eventually reach senility (if I’m lucky, that is) I’ll remember this moment (or not remember) and smile like a cornball. I know there are all those quotes people post on Twitter about how to trust actions, not words. I detect anti-poeticism here. What do I have to do to prove myself: jump out of a plane screaming “IL VOLO FOREVER!” in a green, white and red jumpsuit? You get my point, trust me folks.

When they started my, ‘phone (well, not my phone) could not capture the stark vividness of the red background and their figures, but let me tell you, it was intense. 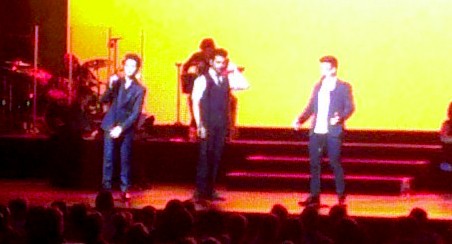 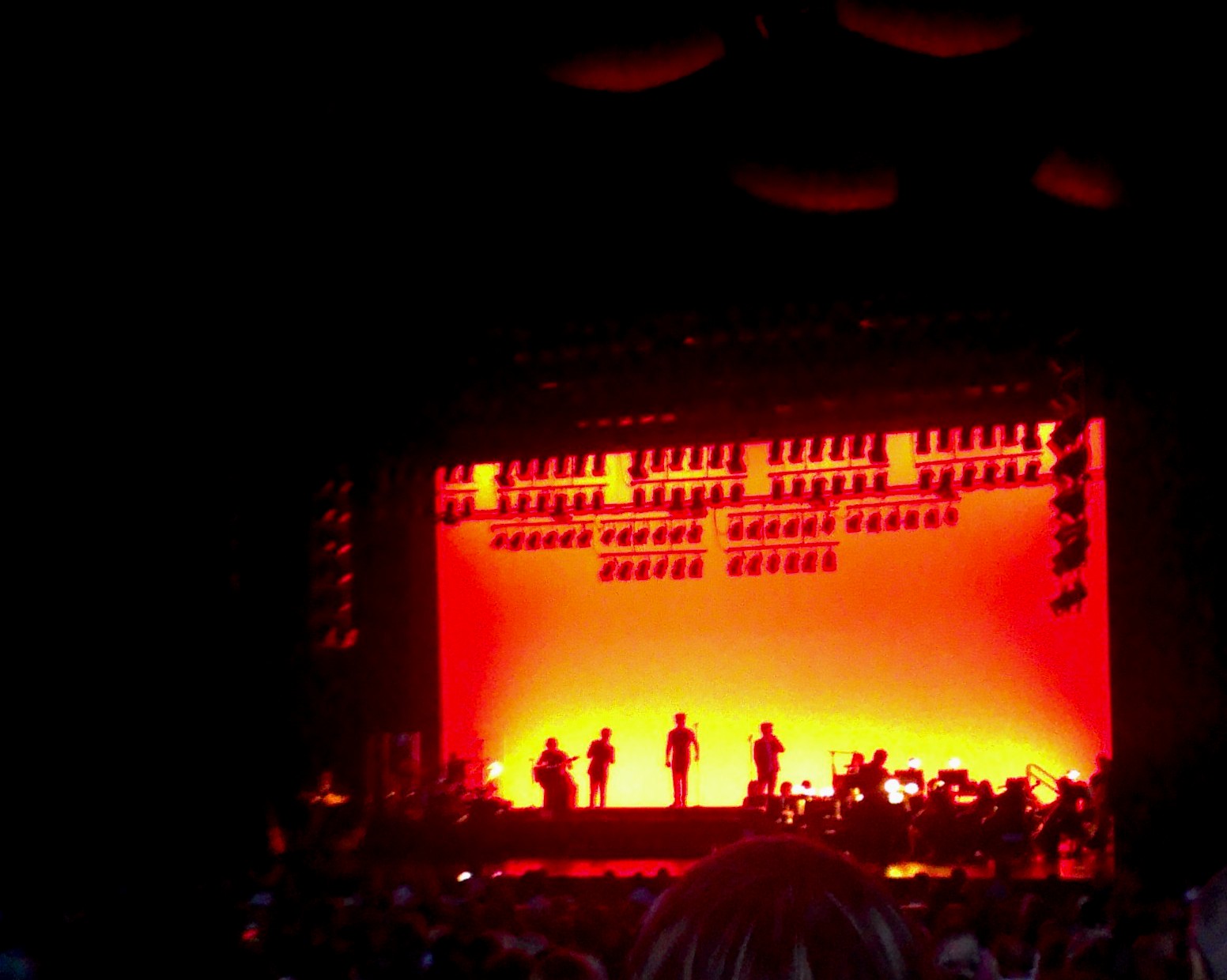 I adjusted it just a smidge to make it seem more like it was in person. 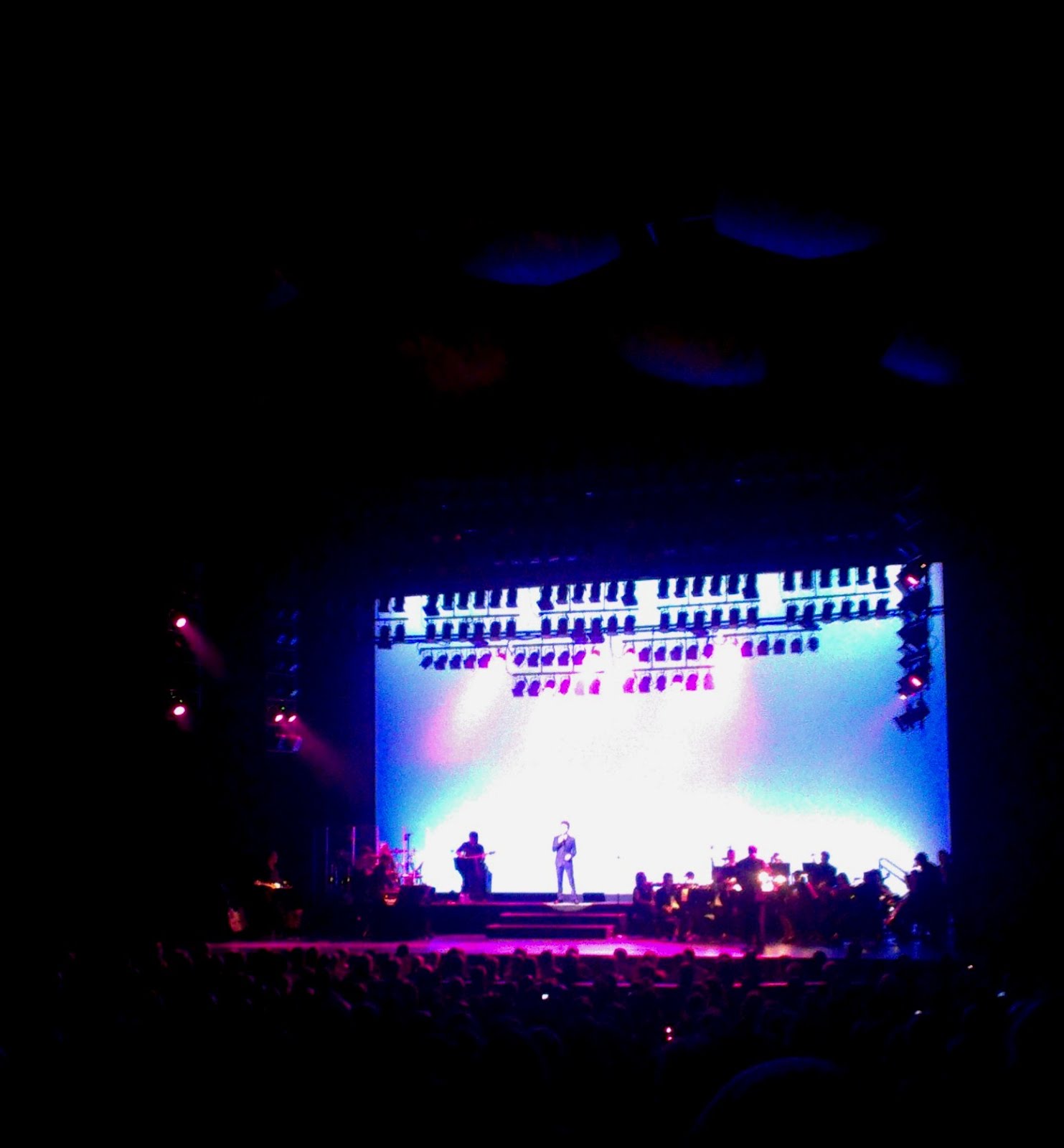 My personal favorite.
Ignazio was the usual joker with his arm around Piero whose face looked comically deadpanned. He went on about the singers they were in love with, and he said that Gianluca was in love with Frank Sinatra (it’ll never work out, I’m afraid), and that Piero was in love with… him! Aha!

Surprisingly, it was also Barbara Vitalli’s birthday that day, so they sang “Happy Birthday” to her! Some coincidence!  I must say that was a little unexpected!!

During the “Maria” number in place of bringing girls onto the stage they instead went by the first few rows and sang to some lovely ladies.

My favorite moment was probably when the selfie (in my own world that is not an accepted word in the Oxford dictionary) prince came out and sang his “Night and Day” number. Not because he reminds me of Elvis but because I think that he executed (in a good way) it so very well.

I have listened to countless old (excuse me… vintage) videos on YouTube thinking there was no reason to ever go to see a concert in person because I thought that I would never hear or see anything that good in this life and era. Michael Buble, Josh Groban, etc, etc… may be good in their own way but I’m afraid they are not a very satisfying substitute. Well, I guess I was completely mistaken. I still I can’t believe I heard something so lovely in person.  Although, I do do a little convulsive knee jerk every time they say they sing it in a “fresh” way, it was never stale!!  (Use of that word is marketing, I suppose and I guess I’m just a overly sensitive music purist. 😮

I think these days people feel a little obligated to give a standing ovation, perhaps out of pressure or politeness. But I can tell you, there was no pressure here. They all deserved each one!

Well, I think I am done waxing lyrical about the concert. It was good. They sounded good. More than good. Fantastic! I liked/loved/enjoyed it. Oh yes!

I especially thank God, thank my dog, thank my parents, thank the universe but most all of thank Il Volo for existing. (I’m sure somebody is going to steal that for an Oscar speech, just you wait).

P.S. I have no idea what possessed me to write this! I must be off my rocker!
P.P.S. The piece my piano teacher gave me to study the day before I went was called “The Flight”. Really!