We the US fans have very strong feelings about ‘the boys’ of IL VOLO. Since the very beginning they spent several of their formative years in the States and we feel that we the fans played a great part in their growth. We love them, worry about them and to be honest are a little jealous and protective.
Some of us were there in 2009 and thru the years many came in one by one into this group. It makes no difference when we discovered them but it makes a difference that we finally fell in love.
Many had the opportunity to see them live in one, two and some four live concerts but many of us could only ‘hug’ the YouTube. I live in Texas and to some it is still  the ‘Wild West’ so it was a great surprise to see Dallas, Austin and San Antonio on the list. I immediately went into a panic mode on how will I get there and how will I get tickets. I live 100 miles from two Theaters and 200 from San Antonio. When I calmed down I contacted the people that would be my “escorts”. Well my daughter was on her way to St. Lucia for a week and others had other things to do. I did not stop. There are e-mails and tex-ing. So at the moment there is a ‘WALL OF SILENCE’ from the family. Texas venues will start selling on the 28th with pre-sale 26th. It was not an easy task to find out this little information. Seems every young lady that answered the phone never heard of IL VOLO. I did educate them.
The reason I would like to post this is so some fans, who for one reason or another, will not be able to go to  the concerts can share some of the IL VOLO tour.
I want to post a few of the Theaters they will sing at.  Too many to do all.

The Wang Theatre of Boston, Massachusetts is located in an historic 1925 building that was originally the Metropolitan Theatre, and later the Music Hall. It was designed by Clarence Blackall and is located at 252-272 Tremont Street in the Theatre District. The business is operated as part of the Citi Performing Arts Center. The building was also known as the Metropolitan Center.

Barclays Center is a multi-purpose indoor arena in Brooklyn, New York City. It sits partially on a platform over the Metropolitan Transportation Authority-owned Vanderbilt Yards rail yard at Atlantic Avenue for the Long Island Rail Road. It is part of a $4.9 billion future business and residential complex now known as Pacific Park.

The John F. Kennedy Center for the Performing Arts is a performing arts center located on the Potomac River, adjacent to the Watergate complex in Washington, D.C. The Center, which opened September 8, 1971, produces and presents theater, dance, ballet, orchestral, chamber, jazz, popular, and folk music, in addition to multi-media performances for all ages. 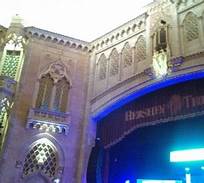 Located in downtown Hershey, Pennsylvania, this magnificent theatre has established itself as the area’s premier performing arts center, presenting the finest in touring Broadway shows, classical mussic and dance attractions, and world-renowned entertainers.

The State Theatre, the first and largest of the PlayhouseSquare theaters to be constructed,  had the distinction of being the venue with “the world’s longest theater lobby” when it premiered Feb. 5, 1921. The lobby also displayed four (now-priceless) murals by American modernist James Daugherty. Opened as a movie/vaudeville house, the State attracted such legendary performers as Abbott & Costello, Fred Astaire, Judy Garland, Jack Benny and The Marx Brothers. In its current 3200-seat capacity, the State has presented musical extravaganzas such as Disney’s The Lion King and Phantom of the Opera.

On April 11, 1921, the new Majestic Theater opened it’s doors during the Vaudeville era. The Majestic hosted a variety of acts from Houdini to Mae West and Bob Hope.
The Majestic Theater was named to the National Register of Historic Places and re-opened on January 28, 1983, as an elegant center for the performing arts in downtown Dallas.Visit Dallas Theater’s Majestic Theater pages for show details, reviews, videos and other information

“Majestic Theater-breathtaking!”
Reviewed August 20, 2015 NEW
Ahh the old world decor of the Majestic is breathtaking. From the wood balconies overlooking the beautiful winding wood staircase that could be straight out of Gone With The Wind! Not to mention the concerts and plays. It feels like you’ve stepped back into the 40’s with all the technology of the Millennium!
Visited December 2014

Built by Temple Buell for Publix Theatres in 1930, the Paramount Theatre instantly surpassed the standards of the dozens of theatres that lined the streets of Denver and has remained the only local theatre of its time to maintain its original dignity and glamour. It is significant not only as an excellent illustration of Art Deco design and craftsmanship and a tribute to an architect who made considerable contributions to the Denver region, but as a unique reflection of a broad social and cultural phenomenon that prevailed in the early decades of the 20th century in Denver and the entire nation

The Mesa Arts Center is a performing and visual arts complex in downtown Mesa, Arizona. At more than 210,000 square feet square feet, the $95 million facility, completed in 2005, is the largest comprehensive arts campus in the state.
en.wikipedia.org

Whether it’s comedy,concerts, or sporting events, the Pearl Concert Theater in Las Vegas has the perfect event for you to enjoy!

Walt Disney Theater is the largest venue at the Dr. Phillips Center for the Performing Arts, with a seating capactity of 2,700+. The theater hosts many different events, including Broadway shows and music concerts, and galas and conferences. The Dr. Phillips Center replaced the Bob Carr Performing Arts Centre, originally built in 1926. The new performing arts center was opened in November 2014, and was designed by Barton Myers Associates of Los Angeles. – See more at: http://www.orlando-theatre.com/theaters/waltdisneytheater/theater.php#sthash.A4GlYvi3.dpuf