Slovakia’s second largest city – population 240 426 (2012) –  lies in the valley of the river Hornád in the Košice basin, encircled by the spurs of the Čierna Hora mountains to the north and the Volovské vrchy hills to the west.In terms of its size and importance in the Slovak Republic, the city of Košice ranks right after the capital Bratislava. It lies in the eastern part of Slovakia, not far from the borders with Hungary (20 km), Ukraine (80 km) and Poland (90 km).

The advantages of this location, near the borders of three states and lying on important domestic and international transport routes, translate into the preconditions for good commercial connectivity. This is significantly enhanced by the existing railway junction and airport with international status. The city is the administrative centre of the Košice Region, and is divided in itself into four Districts. As an independent legal entity it is divided into 22 city wards, each with its own local government.

Košice has a strong economic background, and the city creates employment opportunities for the population of the surrounding region as well as its own. The biggest local employer is the U. S. Steel Košice steelworks, and of the total number of registered employees in the city as a whole, the great majority work in the industrial sphere. The education and transport sectors are also strongly represented here.

Košice stands out as a city due to its interesting cultural, social and sporting activities. Cultural life is represented here, apart from the various museums and galleries, also by four permanent theatres, cinemas, the state philharmonic orchestra, the Ján Bocatius public lib­rary and the regional research library. Significant cultural events during the year include the spring music festival, the international organ festival, the festival of religious art, promenade concerts as part of the summer of culture, and regular events in the Lower Gate museum.

Some of the most important cultural and social events are surely associated with the celebrations of Košice City Days, which have already established their own tradition and gained response from outside the borders of Slovakia. On 7th May 1369 Košice became the first town in Europe to be awarded its own coat of arms by royal warrant.

First place among the sporting events must go to the Košice Peace Marathon, which takes place on the first Sunday in October every year.
Relax
Botanical garden

• The Gardens at Červený breh (“red hill”) were established in 1950, and maintain around 4000 types of plants including exotic tropical and sub-tropical flora as well as a collection of most species common to Central Europe.

Zoological garden at Kavečany
• With its area of 278.3 hectares, this is the largest zoo in Central Europe. Visitors can see over 100 species of animal, but the pride of this zoo is its own herd of thoroughbred mountain horses, which has been included in the gene stock of mountain horses in Europe.
Ružín
• This reservoir was created by damming the River Hornád. It offers a wide range of water-sports opportunities, but also good hiking on marked paths. There is a particularly interesting walk up to the limestone outcrop called Sivec (“the grey one”), 781 metres high, which gives excellent views over the whole Hornád valley area. Winter sports lovers are well served by several ski centres in this hilly area.
Anička
• This recreation area is situated within the Košice-North city ward. There is an extensive park with a mineral water spring and a tennis centre, and there is a children’s play area with a classic mini-golf course. This area is fenced in and supervised, so that parents with young children especially can enjoy themselves in safety
Bankov
• This very popular place for relaxation, sport and entertainment is accessible by car and city bus and offers good conditions for hiking and mountain-biking, facilities for barbecuing and picnicking, and a minigolf course. There is also an exclusive hotel.
Alpínka
• This recreation area is situated up Čermeľ Valley, in Košice’s largest forest park. It is accessible by car and bus, and the Children’s Railway terminates here. Beyond the picnic area there is a nine-hole golf-course.
Children’s railway
Winter activities, for example:
Ski Centre Kavecany
Jahodná.
Košice won the competition among Slovakian cities to hold the prestigious title European Capital of Culture 2013.
The Slovak State Philharmonic Košice -office is House of Arts 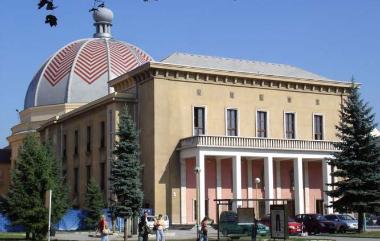 The Košice State Theater was founded in 1945 (then under the name of the East Slovak National Theater). It consists of three ensembles: drama, opera, and ballet. 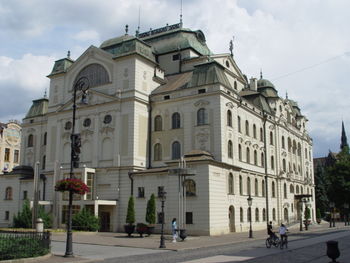 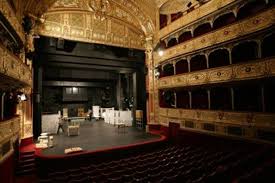 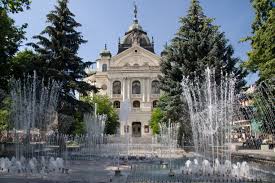 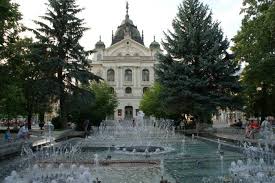 Singing fountain is a beautiful fountain in front of the National Theatre. In the summer you can see many people sitting around it, enjoying the weather, music and water until late evenings. Surrounded by trees, it creates a small park that can provide a nice break from your walk while watching the fountain “dance” to the music. Every hour you can also hear the bells of Zvonkohra (Bell chime) which usually plays traditional songs. After the sunset, the music, fountain and its lights provide a relaxing and a romantic place to rest. 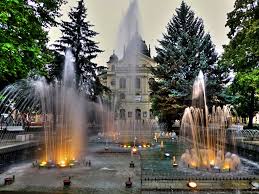 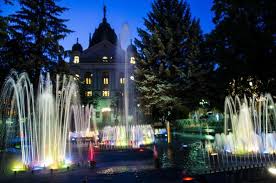 Hlavná ulica, literally translated as the Main Street, is the hearth of Kosice and, most importantly, it is the oldest part of the city. 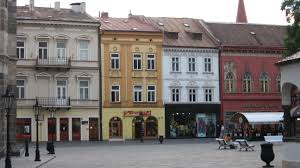 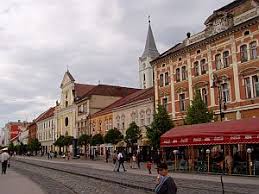 St. Elisabet’s Cathedral is definitely the most popular and the best known monument of Kosice. It is Slovakia’s biggest church as well as the easternmost Gothic cathedral in Europe. 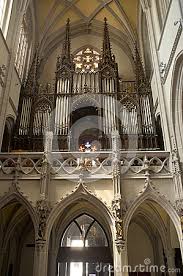 Fountain with Zodiac signs is the second major fountain of the historic center. Many believe that if you touch your zodiac sign, make a wish and walk 3 times around the fountain, your wish will become a reality.

Immaculate (Plague Column) – The Immaculata Statue is the most beautiful Baroque-style sculptured monument in the city. It commemorates the plague of 1710 -1711 and was built between 1720 – 1723. It is a 14meters high column on a stone base with sculptures of Josef, Sebastian and Ladislav. On the top is the sculpture of Virgin Mary. On the pillars of the fence are sculptures of St. Gabriel, St. Elizabeth of Hungary, St. Margita, St. Michael the archangel and St. Barbora. It can be seen and admired from the grounds of the Zodiac Fountain. 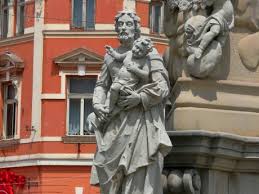 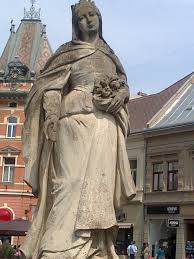 Beggar’s House is located on the  Hlavna Street . The legend says that it is a place where a beggar used to ask people for money. Kosice’s citizens were so generous to him that he was able to build this house. To show his gratitude, at the top of the building he sends his “Thanks” to everyone on Hlavna Street. 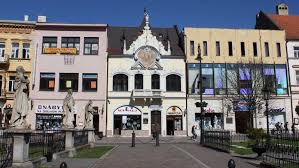